The Force is Strong with this Theme 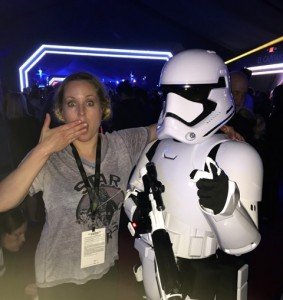 Yup, I’m just going to admit it. I’m a super geek. I luuuv Star Wars. I have glow-in-the-dark lightsaber earrings and I have waited in line for star wars movies far longer than any human person ought to. Back in December my long and persistent octopus tentacles reached far into the galaxy and managed to get me a VIP pass the world premiere of Star Wars episode 7. There I got to take a photo with Darth Maul and a storm trooper on the red carpet which totally made my life. The Force is strong and it’s real and nobody better tell me otherwise!

So this brings me to “themed events”.  As a super geek, I understand the massive compulsive need to submerge a party entirely into a theme. I get a lot of calls from moms who are scratching their heads at the “Mine Craft” theme. How on Earth do you incorporate that? I say we build an entire mine craft obstacle city in the backyard! And yes that’s expensive. But it can be done! But there are other ways to incorporate a theme into a party with spending six months of mortgage payments in the process.

The birthday cake is always a great place to incorporate any theme. A good cake designer can sculpt pretty much anything. Party favors can also, fairly easily, be custom made to fit any theme. For decorations the accessibility to themed items is either super easy (preprinted themes at Party City for example) or difficult if the theme is more obscure or rare. I once found out-of-print vintage star wars plates, cups and napkins for a client. That was pretty cool… It’s always possible to scour the internet for rare items if one has the determination and the time.

Sometimes making your own decorations is not only super fun, but impressive to guests and result in one-of-a-kind never-seen-before decorations and party supplements. Creating your own dessert and candy buffet according to a theme gets the creative juices flowing and brings out the kid in everyone! 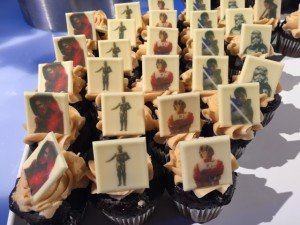 Here are some fun ideas for a Star Wars party:

BB8. Top tangerines each with a chocolate truffle attached by a tooth pick. Then draw on both with white and black frosting. They could also be made as cupcakes instead of oranges. It’s just cool when the orange color of the tangerine shows through for the original color of BB8.

Darth Vader. Fill a clear glass jar (preferably bottle necked) with all kinds of black licorice candy (preferably salty and strong) then drape a small black cape around the neck of the jar. Attach a little label in the shape of a Darth Vader helmet that says: “beware of the dark side of the force”.

Yoda. Yoda cupcakes is a must! Stick green “spearmint jelly leaves” (candy) in the green frosting for Yoda ear cupcakes. Make a label that says: “eat Yoda, you will..”

X-wing star fighters. Cross two tooth picks and tie them with string. Stick a third toothpick in between (90 degree angle). Stick mini marshmallows on all the tooth picks until full. Decide which side should be the back of the star fighter and glue red candies on the ends with frosting.

The Force. Tiny shots of strong Espresso in little cups with labels that read: “The force is strong in here” (only for the adults not the kids!)

giggle factory la in the news Themed Events
Giggle Factory © 2020 All rights reserved. | Web Design by Cal Coast Web Design
This website uses cookies to improve your experience. No personal information will be collected or shared without your explicit consent. By clicking accept you agree to our policy. Accept orRead More
Privacy & Cookies Policy

This website uses cookies to improve your experience while you navigate through the website. Out of these, the cookies that are categorized as necessary are stored on your browser as they are essential for the working of basic functionalities of the website. We also use third-party cookies that help us analyze and understand how you use this website. These cookies will be stored in your browser only with your consent. You also have the option to opt-out of these cookies. But opting out of some of these cookies may affect your browsing experience.
Necessary Always Enabled
Necessary cookies are absolutely essential for the website to function properly. This category only includes cookies that ensures basic functionalities and security features of the website. These cookies do not store any personal information.
Non-necessary
Any cookies that may not be particularly necessary for the website to function and is used specifically to collect user personal data via analytics, ads, other embedded contents are termed as non-necessary cookies. It is mandatory to procure user consent prior to running these cookies on your website.
SAVE & ACCEPT
Terms of Service

If you would like to re-schedule or cancel the party planning consultation, please do so with at least 48 hours prior notice in order to receive a future credit for the same amount.

A deposit of 50% of total cost of services is due upon order. No entertainer or service can be held or guaranteed for a party date until deposit has been received. Deposits can be paid via Credit card only. We do not accept checks. All credit card payments are subject to a 3% service fee. All final balances will be charged to the same credit card used for the deposit on the Friday preceding the scheduled event or service. Services booked with less than 24 hours notice require a $150 expedite fee charged up front. The expedite fee is non-refundable but will be deducted from the total of the service once the service is booked. In addition, all services booked with less than 24 hours notice are subject to a 10% rush fee.

Deposits are non-refundable. Cancellations made within 24 hours require payment in full.

All payments for styling, decor, party favors and desserts are 100 % non-refundable.